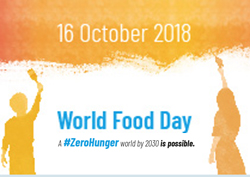 World Food Day is celebrated each year on 16 October to promote worldwide awareness and action for those who suffer from hunger and malnutrition. On the occasion of World Food Day 2018, FAO and the European Commission will organize an event hosted by the MEP Mr. Paolo De Castro that will take place in Brussels on 16th October 2018 at the European Parliament.

This event will consist of a two-hour debate preceded by a networking lunch. It will provide feedback and build on the findings of the recent 2nd FOOD 2030 High Level Event that took place in Plovdiv under the auspices of the Bulgarian Presidency on 14-15 June 2018. It will also focus on the next actions needed to prevent hunger by 2030 and to ensure food security and nutritious diets for all. FAO celebrates World Food Day each year on 16 October to commemorate the founding of the Organization in 1945. Events are organized in over 130 countries across the world, making it one of the most celebrated days of the UN calendar.

The joint event on World Food Day is a chance to show the commitment of the EU to Sustainable Development Goal (SDG) 2 – to achieve #ZeroHunger by 2030. The Commission launched the EU Food Strategy 2030 area on World Food Day 2016, followed by the 1st FOOD 2030 High Level Event in Brussels in 2017.

For security reasons and to get access to the European Parliament, registration is compulsory. Further details on the conference with the registration link will be provided early September.